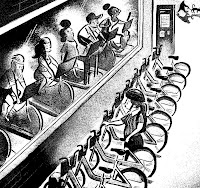 Freshly returned from a week of the world’s best cycling in Tuscany, I had opportunity to reflect on a favorite subject of mine: group energy, group dynamics — what works and what doesn’t (and perhaps shouldn’t!). Our intrepid wee crew were five in number. And a more diverse quintet you’d be hard pressed to find. Four cyclists and a fifth member very content to rest, read, and reflect as she invested fully in a 21-day meditation challenge — with, just for balance, a healthy sampling of Italy’s history, food, and other distractions. Two bikers of modest experience, new to the 12 to 15 percent grades of long, twisting climbs and knuckle-whitening descents; two with decades of riding and thousands of kilometers on their resumes.  Two couples virtual strangers to each other. But how well it all worked!

Group chemistry is rarely a fluke. And even less ‘accidental’ (and perhaps just a bit counter-intuitive) is to find a ‘designed’ or planned group composition to be a particular success. Building a ‘team’ is not as simple as it might sound — seen any of the Blue Jays so far this season??  Many years ago, I’d run across a hiring policy utilized by a successful, off-shore auto industry giant in its selection of middle and upper management candidates who would be ‘working together’. This policy has been christened creative abrasion. The aspect that caught my eye was the intentional pairing of individuals who did not subscribe to similar business philosophies and who would likely challenge each other’s ideas. The thought was that constructing a group of ‘yes men’ or spouters of the party line may promote a superficially compliant and consistent work environment; but at a deeper level it was to simply build a ‘choir’ of a single register, whose creative capacities would be severely limited as a result. Worse, who would have the courage, much less insight to offer much-needed, self-correcting devil’s advocacy?
I’ve had occasion to watch two films recently (one has to protect oneself against the cinematic choices of Air Transat, after all — better to download than trust to the TS universe!) that explore this same concept with some considerable eloquence. Friends and Crocodiles is built around a Gatsby-esque character, and set in the late 1990′s. It examines the career vagaries of a (sometimes) wealthy and highly creative young man who samples the extremes. These polarities range from a totally self-contained and highly indulgent ‘estate’ wherein no limits are placed on one’s creative inclinations; to an equally failed and utterly stifling attempt at joining a ‘think tank team‘ (a bit oxymoronic when one considers it). Throughout, our protagonist has the instinctive wisdom to recognize that he needs ‘grounding’ in some fashion — lest he orbit too far from a balanced centre and escape ‘gravity’ completely. To this end he hires a ‘secretary’, initially the sole counterpoint to the laissez faire ‘insanity’ and self-indulgence that characterizes the estate.
Not surprisingly, once the first great experiment fails, she opts for the ultra-conservative main stream of big business, firmly anchoring the other polarity of ‘group think’, callous and often blatantly self-serving choices — but never losing sight of her own ethical centre. Predictably this ‘establishment’ posture also fails, with the ‘pair’ recognizing that alone, they swing ‘too wide’; and while the energy is too intense when in close proximity to each other, they absolutely need the balancing influence of the other — at a safe distance! Creative abrasion to be sure.
The second film, Cloud Atlas, is a complicated piece exploring themes of collective unconscious, karma, and compassion.  With its half-dozen stories, covering several centuries, it too explores the importance and sometimes tragic outcome of the questioning, challenging posture. And, as importantly, the need for ‘pairing’s’ of two solitudes: slave with (ultimate) abolitionist, primitive with highly advanced cultures, intrepid investigative journalist with tentative and timid scientist, rebel with engineered organic automatons — neither ‘complete’ within themselves, requiring the contributing energy of their counterpoint.
From bicycles to movies to diagnostic manuals. With the advent (ascension?) of the DSM-V, the psychiatric ‘bible’ for classifying mental disorder and replacing the DSM-IV this year, comes a final instance of creative abrasion. David Kupfer, the chair of the committee charged with revising the earlier version, could not be more philosophically distant from Thomas Insel, the head of the National Institute of Mental Health in the U.S. The latter sees an abiding need to develop not just another compendium of symptoms, based on little more than patient self-report and of little utility in directing treatment to a causal source.  His ‘Research Domain Criterion’ makes a compelling case for identifying hard research data underlying various disorders; supported by ‘tests’ for same. Dr. Kupfer, ever the pragmatist, is quoted in response as follows: “Insel’s vision of a system based on biological and genetic markers remains disappointingly distant (italics added) and cannot serve us in the here and now. It merely hand[s] patients another promissory note that something may happen sometime.” Still in an interview recently on CBC radio, he concedes “efforts like the National Institute of Mental Health’s Research Domain Criteria [RDoC] are vital to the continued progress of our collective understanding of mental disorders.” Two solitudes, each holding the other to account, balancing the polarities.
Choirs undoubtedly make lovely music — but only when all four registers are present and accounted for. String quartets, by the very virtue of their ‘fourness’, are reportedly very complicated beasts (from BBC Music’s May 2013 article String Tension), evidently running counter to nature’s eschewing of this number in a group. Nevertheless, to paraphrase, with respect for the role of the other(s), comes the group’s  harmony.

I’ve a few (apparently) disturbing paintings hanging in my office. There was no malicious intent; no attempt to unsettle. One, a gift from my mother, no less. A second by one of my favorite artists and sometime teller of children’s stories, Leslie Watts. A third, an innocent enough purchase at a Gallery auction (as in ‘I love my . . . ‘ — how could there be any malice in that?). And a fourth, by the same Ms. Watts, soon to be retrieved from its (tenuous) wall space in local gallery and Canadiana emporium, Village Studios — to the evident relief of the gallery owner.

My first inkling that I may have inadvertently covered my walls with the artistic equivalent of projective tests came from the somewhat indignant and challenging comment of a client some years back. To wit, ‘how could you hang a picture of a bloody, drowning horse in here — of all places!’  Hmm. Hadn’t noticed that myself until you pointed it out. But then I sit with my back to it — all the better to unnerve you (again, evidently). The artist, a palette knife specialist, had abstractly rendered the B.C. forest scene at right, placing centrally a splash (oops, there I go again) of red in the otherwise dark (and sombre?) tableau. Alerted to the double duty being served by painting, I began to collect ‘interpretations’ in the years since. To be sure, the ‘horse’ has ‘surfaced’ a few more times, along with a wounded swimmer, a sunburned grasshopper – and a number of other, generally ‘dark’ images.

Then there’s the ‘Cellar Steps’ (at left). Painted largely in gray’s and black’s, the image attracted me largely for the nostalgic resonance it triggered in me, so similar was the scene to the basement entry in my own childhood home. I hadn’t considered the ‘layers of meaning’ that would potentially be peeled back as folk with a whole host of associations entered the room and were faced with. . . well, evidently a whole host of associations. Seen variously as symbolic of a descent into some dark place in the psyche; or the  residence of some unnamed, formless fear; or just a well-rendered representation of the lower levels of houses from bygone days. (Now that I mention it, I kind of lean toward door number 2 as I recall those anxious, childhood dashes — down to get a jar of preserves, never looking into the shadowed corners of the cellar and certainly not daring to contemplate what might be secreted under the steps, watching and waiting to snatch the young David’s ankle thru’ the open-risered stairs.) 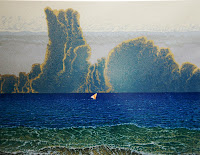 And we can’t ignore the huge print pictured at right and upliftingly entitled ‘Serenity’. Ever the innocent art lover, I’d always seen this seascape as displaying intrepid courage, engagement in a freeing, thrilling passion — windsurfing, released from the cares of the work-a-day world. Hadn’t really focused much on the isolated, vulnerable, puny helplessness of this boarder as he/she, likely naively and oblivious to the roiling clouds and impending storm, skirts disaster or worse. . .
Poet Robert Bly has christened artists and writers as society’s ‘hired guns’. His reference is to our resistance to seeing the world for all that it is; our tendency to put a little smiley face at the end of a sentence. He maintains that we essentially ‘pay’ this talented subset of our culture to portray the ‘truths’ that we might be in just a bit of denial around. Think Greek tragedy as a prototype — framed as ‘entertainment’, but pronouncing on our darker sides. Or Shakespeare, the master of showing us human folly and proclivity — as ‘just good theatre’ on a Sunday afternoon. Disturbing isn’t so disturbing if it’s up on stage or ‘projected’ on a screen or evidently, hung on a wall.
I see this relating to mindfulness practice in a quite direct way. How we might view a particular piece of art or theatre, how uplifted or unnerved we might be by same, is in part a function of our life view. And it behooves us to take note; to use this as a direct conduit into self-knowledge.  To be ‘freaked out’ by a painting or a play is information, quite possibly pertaining to our own particular ‘shadow’. How better to gain wisdom about self than ‘at the safe distance’ of an observer. How better to incorporate this knowledge into our own individuation process than by noticing it — not turning away from it. 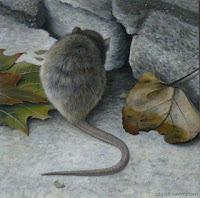 And so I happily add to my collection with only the slightest twinkle of impishness. Thanks for being my hired gun, Leslie. And it’s off your wall, Martha. 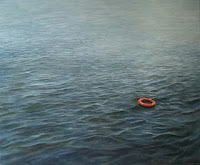 And just for fun — your reaction to ‘Life Ring’