As is often the case, for our household(s), polarities and paradox seem to be the ‘themes’ that best characterize the year that’s been and is now drawing to a close: mobility set against permanence, milestones passed engendering a return to familiar touchstones, simplicity facilitated by increasing sophistication and complexity.

Perhaps the appropriate starting point is the ‘mind map’, stuck up on the wall in front of me, serving to guide and constrain (to something under a book) the annual update — and, again appropriately enough, driven by a little ‘app’ called Simple Mind. The researcher-in-residence (aka, Nicola) had established as 2011 affirmations a return to mental, physical, and spiritual fitness — not that the first had ever wandered far from the path; nor had the last, although always evolving, lapsed in any significant way. For the middle — well let’s just say for both of us, it had become a little more substantial than we would have wished (that would be ‘the middle’). Enter the Pomodoro Technique — with mind maps to follow close behind. For the household accountant, discipline (read time management via Mr. Pomodoro and its 25-minute ‘chunking’) and organization (mind-mapping, at first glance, looks like a flow chart gone postal — but it works!) are figural in whipping the old brain back into shape. And the happy vehicle for all this structure is a return for Nicola to a long-lapsed piano passion. Touching base with musical muses sees her regularly shuttling between Stratford and Toronto. Oh dear, how does one bear the restaurants, the city’s vitality and energy, and contemplative time to and fro on the train? Practice has taken on a multiplicity of expressions from daily twenty-minute meditations and work-outs in the basement ‘fitness lab’ (more of that later), against a background of double flats, scales, and regular viewings of Piano Anne’s You Tube postings. How could one not lose weight?

2011 saw both Jill and Andrew move households — their respective ‘better halves’ initially and energetically fulfilling the role of fiscal devil’s advocate — to digs that are both charming and well-situated. Jill and Brant find themselves mere minutes from work in downtown London, on the edge of ‘old North’ having cheerfully escaped the ‘is that police cruiser for this complex or the next?’ angst of the east end. Simon and Andrew can fall out their flat’s front door and end in the Distillery District, a treed, ten-minute stroll from the Cathedral and spitting distance (hmm, should work on that descriptor) from St. Lawrence Market.

As for the permanence bit, Jill saw another boogie man (oops, boogie person) fall off the radar — the persistent worry around renewal that haunts the contract worker. LoL (that would be London Life — although it could equally be the other tagline, I suppose) saw fit to ‘make her permanent’. One of those, careful what you wish for situations, of being ‘legit’ in a structure that is not exactly one’s ideal — but when is it otherwise? And so ‘I can see clearly now’ not only describes the immediate vocational future; but also the actual eyesight following some recent surgery to correct persistent double vision (seeing one boogie person is bad enough, but two!). 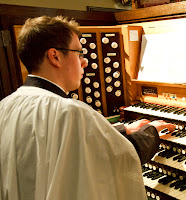 Permanence found its way into the Toronto household as well with Simon securing permanent residency status, after a long and varied roller coaster of an application process. Never hurts to be too careful with those Yorkshire-men seeking to set up Lord knows what kind of covert, organist cells in our unsullied landscape. Working pro bono really was getting a bit old. St Mary Magdalene’s is the big winner with Simon now able to take on

the assistant’s role in their storied music program (move over Healey Willan). And Andrew continues to be a ‘one man band’ at St. James Cathedral, more than capably filling the role of interim director of music for another year. No mean feat between ducking office manager tantrums and balancing a music budget, with weekly recitals and a good bite out of a goal of playing his way thru’ Bach’s organ repertoire.

And mobility wasn’t limited to bag and baggage. Well guess that’s not technically true as David chose, for his cycling adventure of 2011, to drag just that from sea to sea across the nor

th of England. Two weeks on two wheels with two panniers (and several thousand pounds of camera gadgetry) was just enough to make some 25% climbs thru’ the Yorkshire Dales, let’s say more than challenging. Lots of opportunity to see the countryside in infinite detail with pedal, pedal interspersed with puff, puff (and not just the occasional pause and push). Morecambe to Whitby (been there, done that, bought the t-shirt — no really!). And there’s absolutely no correlation between turning 65 (I’ve got Stephen Harper’s letter explaining the OAS clawback to prove it!) and undertaking challenges more suited to a twenty-something, than a sixty-something. Taking no chances on back-sliding in the winter of our (cycling) discontent, Kurt Kinetic (the cutest little lime-green trainer — think training wheels with a lot of carefully calculated drag) has joined the indoor stable of treadmill and exer-cycle.

From man in motion to gal with a goal — more on the mobility front. Jill realized a (very hard fought) ta 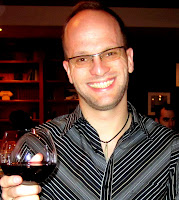 workouts in the final days of 2011). And a lot of those post-wall moments could have ended less satisfyingly without the one-man support crew, photographer, whipping boy, sport’s psychologist, and all around cheer leader: Brant. This man gets the 2011 family award for biggest heart and thickest skin by a country mile! Little wonder that in his ‘off-duty’ (when is that anyway, Jill?) moments, he finds restorative comfort staring contemplatively into the depths of aquaria; and can be heard polishing his ichthyological communication skills — no grief or back-talk from these little buggers (and besides, they’re on the other side of a glass wall!)

Even houses have their neurotic sides (or, in this case, sidings). As word of all the household moves filtered down to Chez Neal, we noticed distinct signs of an identity crisis 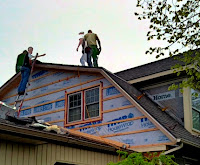 beginning to surface. Naught for it, but a long-overdue facelift — with new chapeau (aka roof) and togs (board and batten siding) to fend off any further, incipient security issues. And to put a period at the end of this sentence, Nicola reworked the ‘back 40′ (alias the ‘potting plot’), creating a Provencal, micro-climated, kitchen garden. One could almost feel the tension ease in Neal’s shoulders as the aubergine and pomodoro (that would be eggplant and tomatoes to us locals) proliferated!

And finally, just to ease the UK to colonies transition, a very significant British contingent found its way for visits to our fair shores, with Simon’s parents, Debbie and Brian, grandmother, Jean, and cousin, Marj sampling the fare at Chez Neal amongst other destinations. No arm-twisting required at all to ensure our return visit in the upcoming year — not a day passes that I don’t moon over the Dales of England’s north.

Blessings from us all, 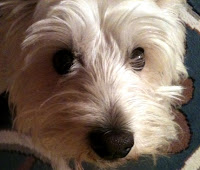