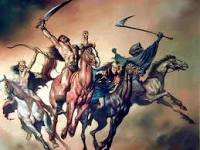 PB-16 (aka, Pope Benedict XVI) has leapt into the Christmas entertainment sweeps, trumping the Spielberg’s  and the Lucas’s with his own ‘Star Wars Trilogy’ — well, Star of Bethlehem, actually. Jesus of Nazareth, the Infancy Narratives has hit Chapters — just in time to stuff stockings with the real Christmas Story — completing the cycle, with the Pope’s own ‘prequel’, as it were. Where would we all be without someone channeling God to help us understand the literal truths of metaphors many of us have been struggling to employ — just to allow us to continue crossing our chosen thresholds on Sunday mornings? Organized religion — the great proscriber.
Warning: Tasteless joke
Sister Mary Margaret was completing a census form and had ticked the box marked ‘NONE’ when queried about her religious affiliation. Looking over her shoulder, Father Tim noticed and was shocked. “Sister, what are you saying?”, he asked in alarm. “Not to worry, Father. I’ve just been doing some thinking lately and realized I’m more a nun — out of habit!”
Just to complicate by introducing a third thread, and on a (marginally) more serious note, I’d had opportunity to hear interviewed the philosopher/mystic associated with the Findhorn Community in Scotland, David Spangler. He was discussing his views on planetary citizenship and contrasting it with the chronic (and intensifying) issue of ‘silo building’ — the ‘us and them’ distinction so fondly supported politically and religiously. He was appearing on a program loosely built around (yet another) prediction of ‘The End Days’ — amongst the legion of doom and gloomers, known as the end of the world. Seems the Mayan calendar is ending its (for some) last cycle on December 22, 2012. Personally, I’ve always dreaded the year when the Milk Calendar would no longer arrive as a free insert in one of the holiday editions of the local rag; but frankly, its absence never really triggered End Days angst in me. But maybe I just don’t know how to read the ‘signs’ properly; too smug by half I suppose.  With the end of the world, of course, comes another phenomenon — for some longed-for, for others ridiculed: the Rapture!
Now to attempt to pull all these loose threads into something other than a misshapen sweater.  Let’s try working backwards — somehow seems fitting, given themes herein addressed! The Rapture, for those who aren’t card-carrying Republicans and/or Christian fundamentalists (although the overlap is astounding; Note to self: do a Chi-square analysis on this relationship sometime, post-retirement), is that hour when all ‘true Christian believers’ will be swept up to heaven.  And the dregs (that would be everyone else) better start investing in ice cubes and air conditioners — it’s gonna get hot!  (Second Note to self: Read Tom Perrotta’s The Leftovers). This is the final sorting out of the good guys from the bad — talk about the ultimate in silos — and will coincide with the end of the world (whether predicted by the Mayans or the guy on the street corner with his hand-lettered sign: REPENT, NOW! )
Spangler occupies quite the opposite posture from the ‘rapturists’. The latter group appear almost to be salivating, waiting for this great validation of their (unique and quite exclusive) beliefs — a sort of ‘bring it on, we’re ready!’ stance. Spangler, on the other hand, suggests that hitting the ‘reset button’ — (didn’t work real well with Noah and not sure things are all that different now; the boats are just bigger) is neither responsible nor, in fact, even sane. He advocates adopting a (and here’s a novel idea) unified, global approach, driven by consolidation, not isolation. Admittedly this is a tall order, given the degree of entrenchment at almost every level of individual, community, state, and national beliefs; paralleled equally in our parish, denomination, and ultimately, faith systems. Far more palatable, apparently, to hunker down in our own little value system — and wait for the End Days.
So what to make of our good Sister Mary Margaret. Is it possible that the ‘incredible shrinking church’ (and the proliferation of the Nones) is in any way associated with a growing number of folks’ distaste for ‘belief branding’. ‘Better dead than red‘ thinking may just be being displaced by ‘better none than . . . ‘ — you fill in the blank). Signing on to a belief system that requires rigid adherence to a proscribed perspective is just not that appealing anymore. And in fact stifles the very spiritual introspection and exploration that (given current research findings) characterizes the Nones. This growing group is, contrary to stereotypic view, a very spiritual bunch vs. a bunch of lazy agnostics too self-absorbed to commit to a faith system.
And finally, PB-16. Not to beat up on Catholicism, but come on, Joe! A literalist, selective, exclusive view may make for a good stocking stuffer in some (few) households, but more than anything else it perpetuates an ‘editorial policy’ commenced in the 3rd Century, when organized religious systems commenced in earnest the vetting of ‘what to leave in; what to leave out’ — and have been hard at it ever since. Picking and choosing those ‘stories’ that support not just religious, but political and power-hungry agendas; and burying (in some cases, quite literally) the rest.
One final thought. The current version of ‘Revelation’, the apocalyptic final (for now) book of the Bible, is evidently not the only revelation written in and around the 1st Century — it just happens to be the one that contains detailed instructions on how to build a better silo. John of Patmos’ visions made the cut evidently as much for that reason — and has provided fuel for versions of the End Days ever since (freely interpreted to fit the going politico-religious needs of the day). The others — largely concerned with personal, spiritual healing and enlightenment — were rejected. Apparently not sufficiently dire, proscriptive, or narrow. Oh well, it won’t matter in another two weeks or so. Counting down now, all together. . .