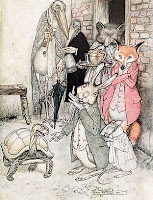 I’ve always been a slow reader. Long (long) before the day of EQAO standardized testing in elementary and secondary schools, little David would break into a cold sweat at the prospects of the 1950′s version of this same ‘torture’: a timed reading of a paragraph, followed by questions on the content. I would marvel at other kids who (apparently) devoured the text and zoomed through the questions, unhesitatingly. I fashioned different strategies: attempting to skim the paragraph, guessing what might be queried, steeling myself to focus (checking the clock to see the time remaining, I’m sure did little to enhance) — all to no avail.  Turns out the best and only strategy for this particular student was a careful reading, attending to each word and punctuation mark; and counting on what was a surprisingly good retention of the content — as far as I got.
Who knew I’d had it right all along. Good thing too. The speed-reading courses my parents compelled me to attend (unsuccessfully) are fine it seems, if one’s cup of tea is the latest Harlequin; not quite so with things a bit more weighty.  Recent research is now confirming that a slow and steady, studied approach actually stimulates increased blood flow to the brain more so than zooming one’s finger down the middle of the page, catching what content one may an inch on either side of said digit — and calling it reading. (What was Woody Allen’s famous comment on reading speedily, after consuming War and Peace in 20 minutes? ‘Something to do with Russia’). Validated at last!
And so, in praise of going slow, became something of a mantra for me this week — and I began to look for and marvel at the myriad instances where pausing, considering carefully, then proceeding (or not) seemed to produce a more balanced, mutual, and satisfying outcome. Equally, having received more than my share (a single one would have satisfied and passed that threshold!) of ill-considered emails in the past few days (note to self: no reading of email after 9 p.m.), I speculated on what the content of these epistles might have been, had the writer carefully re-read, edited out sarcasm, presumption, boundary violation, and frank rudeness and misinformation — then hit SEND (or not!)
Reactivity is such a satisfying exercise — for the moment. The single-digit salute is a near-reflexive part of our ‘vocabulary’ when challenged, offended, infringed upon, or merely ignored. The gratifying emotional surge when a sound bit of verbal repartee (briefly) goes in our favor. The adversarial process is endemic, it seems, in our culture. The choice to fight or flee are often perceived as the only options: the former feeding our need to confront, defend, and dominate; the latter viewed as cowardly, acquiescent, and frankly wussy. Both, of course are rooted in the deeply seated ‘lizard brain’ need to instantly ‘solve’ a situation — when delay meant you were someone’s lunch.
Going slow is counter-intuitive and not particularly well-supported in our society. ‘Sitting with’ an issue is rarely preferred to the quick off the mark retort. Without it (the ‘going slow’ directive), however, it’s very difficult to notice what’s going on in the present moment. We become more easily ‘victimized’ by our automatic behaviors. We hugely limit our choices. All of these more desirable strategies — noticing, behaving with intention, having options — are supported by a regular, mindful approach to our day; and to our companions. Always nice when proceeding slowly and purposefully is borne out!
Dew-bowed barley heads
In morning sun’s scant, slant light
Radiant prisms.
Misty morning, riding east along Vivian with sun low and rising. Heavy seed heads, coated in dew nod on my way past. 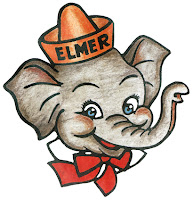 Odd the associations that come up. Who’d of thought the pennant of Elmer the Safety Elephant, flying proudly below the Red Ensign on the front of Rose Seaton Public School would be the abiding image fluttering through a piece on ‘noticing’. Not sure if Elmer is still about (although there do seem to be an increasing number of elephants in rooms!) — but, if memory serves, back in the day this particular little triangular flag was awarded elementary schools which had managed to keep their youthful charges safe from traffic mishap for the preceding year. Elmer’s abiding message was pretty simple: pay attention!
Translating his 1950′s edict into today’s language, Elmer might equally have implored us to stay present and be fully aware of what’s going on around us — as we step out from between parked cars, or hop on our bikes to head home from the school yard, or chase a ball into the street. Stop, look, listen. Not bad advice for a pachyderm in an orange sailor’s cap.
Perhaps it was my week’s conversations that conjured up old Elmer. Three in particular — a coincidence that the chats were all with men (not to impugn the mindful status of one gender over the other). All three struggled with some aspect of presence: one concerned that he was quite literally ‘losing his mind’, presenting as an apparent  problem with memory; a second so easily distracted that the mere whiff of an incoming email or text was enough to send him off on a tangent from whence he might return only hours later; and a third preparing to set off on a ten-day adventure into silence. As we dug a bit more deeply, there seemed to be a common thread running thru’ all three. In the first case, the ‘loss of mind’ was very clearly — after some thorough assessment — not happening. Afoot, however, was what, in the business, is called an ‘attentional issue’: in short, not paying attention to what’s going on in the present moment. The mind, the memory was just fine, thank you very much; the discipline to attend was not.
The second conversation orbited around worries of attention deficit and the workplace inefficiencies that so often coattail on this style. Fact or fiction, the ‘fix’ is the same: noticing one’s response to those niggling little distractions and providing oneself a choice — to check or not to check — versus the knee-jerk twitch that has us automatically dancing to the tune of the next ‘incoming’, again, without a thought.
And finally, chat number three. This particular man, as with many of us, had spent precious little time with himself — and he was, not surprisingly somewhat anxious about the prospect of ten days with a ‘stranger’. What he was preparing to do was to make room, in a rather profound way, to do little other than notice.  In the absence of small talk, business and social commitments, distractions of any stripe one can imagine, he was carving himself out a silent space to watch and, best he could, remain in the present moment.
All three are bright, successful, accomplished professionals. Despite the study, training, and business practice, all three were in need of cultivating one more skill: what I would call the attention reflex. It’s reported that in 1948, in the first year following the introduction of Elmer and his simple rules, traffic accidents involving children in and around school hours dropped by 44%. It’s my view that, by raising child awareness of the surround, in the moment they were about to act, it allowed this reflex to be triggered. Simply put, ‘brain engaged before proceeding’. Call me cynical (it wouldn’t be the first time), but I suspect kids, by having an elephant sit on them repeatedly, developed this reflex, ‘automatically’ stopping, looking, and listening . . . then acting.

In the absence of our personal pachyderm, identifying opportunities to attend — making room to notice — becomes something of an individual challenge. The haiku at the top of this piece popped out during one of the activities that I do my best to inject frequently into my week: the solo bike ride. Noticing is facilitated — not good to ride a skittish, skinny-tired vehicle without paying attention. The daily sit too is a formal structure again, by which ‘room is made’. Finding moments to pay attention, cultivating the reflex to notice, disciplining self to observe, then react is available in myriad moments. Elmer seems to be onto something. Certainly works at level railway crossings!