To glove or not to glove . . . sorry, Hal, but that’s no longer the question! That gauntlet got tossed (down) a long time ago. The quandary now, to continue the Prince’s equivocating ways, is which glove?

The most complicated piece of prep before heading to the grocery store used to be remembering the list. Smart phones kinda obviated that bit. Then came the days of reusable string bags. Aside having to excavate and disentangle from all the other trunk junk, that one got solved too: get a green bin. And now it’s the glove dilemma. So many choices, so many considerations. With the weather finally warming, sliding by with the winter woolies just doesn’t fool anyone anymore. And so a brief primmer on the pro’s and con’s of what’s out there: 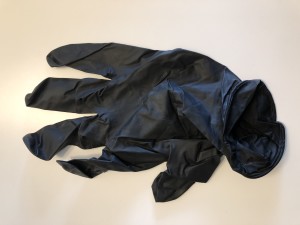 The beauty at the left is fast becoming ‘standard issue’. Cheap, disposable, chic (if black is still the new black), and available thru’ my son in law’s generosity. (He keeps a, now dwindling supply for work on the oilier jobs with his 2CV — tantamount to surgical procedures in some instances). I’ve ‘test-driven’ this model. Easy off, full tactile experience (whatever that means), and clearly (as long as Simon’s supply holds out) affordable. The rub, as it were, is ‘easy off’ does not mean ‘easy on’. Anticipating the problem, I spent some considerable time in our parking garage (to avoid embarrassing moments in the store lot) donning these babies. I found ‘pre-stretching’ an essential: standing on the cuff and pulling upwards, gently but firmly, toward the knee. (A measure of economy is lost with several pairs being lost to the process.) Then looping the (now expanded) cuff over the opposing thumb, clenching teeth over same (cuff, not thumb) and pulling for all one’s worth. Makes donning compression socks look like a dream — or just maybe a viable alternative. 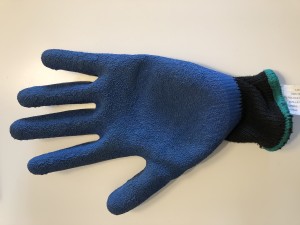 The latex-faced, nubby-palmed construction model has much to recommend it. Unlike it’s limp sibling (above), it’s a breeze to put on. No more dropped bottles of cheap red, boasting excellent qualities of adhesion to those slippery surfaces. And no risk of incidental electrocution. Downside: punching the touch screen on your smart phone is a fool’s errand. The ease of on and off is compromised with the need to do just that, several hundred times — as the list fades to black. Expensive, but washable, reusable and not wholly unattractive.

The Jack and Jill is next up. Gender accommodating, for those of us born in the mid-last century. Readily available in most households — although the provenance of used gloves may need to be confirmed if found under the bathroom sink. Covid-19 is one thing; residual . . . well, best left to the imagination. Smart screen responsiveness can be variable. 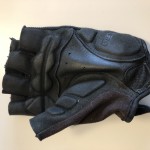 Sadly, the hockey bag, the cycling shelf, and / or the baseball locker, despite offering up a wealth of choice, have some obvious limitations, generally begging the question. 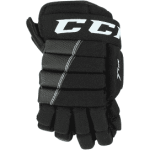 And so to Prince Hamlet’s parting ambivalence:

Whether ’tis nobler in the mind to suffer
The slings and arrows of outrageous fortune,
Or to take arms against a sea of germs
And by opposing end them.

Not an easy call!

Let mans Soule be a Spheare, and then, in this,
The intelligence that moves, devotion is,
And as the other Spheares, by being growne
Subject to forraigne motion, lose their owne,
And being by others hurried every day,
Scarce in a yeare their naturall forme obey:
Pleasure or businesse, so, our Soules admit
For their first mover, and are whirld by it.
Hence is’t, that I am carryed towards the West
This day, when my Soules forme bends toward the East.

Ten years ago to the day we were in Cheshire housed for Holy Week in an idyllic, converted outbuilding misleadingly called ‘The Stable’. (If this was a stable, these had been very pampered cows indeed.) Perched on the cusp of the UK’s Peak District, an hour’s drive east of Chester Cathedral. Daily, we’d head to the still partially Roman-walled city that houses this beautiful sandstone edifice. And join the several hundreds, drawn to the ritual and, in Chester’s case, the artistry of the week’s services.

The decision to ‘immerse’ in the progression of days, commencing Palm Sunday, had not been difficult. Early days spent as an ‘indifferent Presbyterian’, the concept of a compelling build to Easter Sunday had failed to take root in my spiritual side. Easter holidays had meant annual trips to find warmth, usually south of the Mason-Dixon. Later, Good Friday was a day off work. Easter Sunday, after the mandatory church service (generally, the only service!), was as much about ham, scalloped potatoes, new ‘bonnets’. chocolate rabbits, and egg hunts. A ‘brush’ with Anglican liturgy had piqued my interest a few years earlier. And so, here we were.

We’d come expecting a full plate of Evensong, supplementing all the traditional service elements of the ‘season’. We were not disappointed. The ‘bonus’, however, followed Good Friday morning’s service: a three-hour devotional, somewhat enigmatically entitled Let There Be Dark. Canon Trevor Dennis, a teacher, writer, and performer, in addition to his role as clergy, had assembled a selection of readings from his several collections of poems and stories, interspersed with periods of contemplative silence, organ music, and hymns. 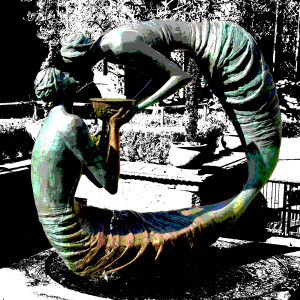 The readings were delivered, depending on the particular ‘spin’, from the pulpit (the ‘right’ side, corresponding with the ‘upbeat’, positive stories) or the lectern (the left side for the sinister ones). One narrative thread included a plea for understanding from a Jew of Christ’s day, recounting the potential for chaos visited on him and his brethren by Jesus’ radical ideas, asking for a bit of patience and time to adjust. Another, a diatribe against chocolate and ‘spring colours’, appropriately ending with ‘let there be dark’. Others: Job’s wife given a voice, Eve, admitting to feeling that it was ‘safe to go back in the water’ — only to find her long-awaited celebration shrouded in black.

It came as no surprise that, following each reading, the nave was absolutely silent. This was not a man advocating dark thoughts. Only that each side, each polarity serves to define the other. To inform, clarify and give meaning to the other. Both deserve, require exploration and, ultimately acknowledgement and acceptance.

This Easter Sunday morning echoes much of the paradox, the contrasts that Donne may have felt as he penned his Good Friday poem, four hundred years ago. Taken as a pivotal point in the poet’s life, as he transitioned from the secular to the spiritual, his journey’s account describes his pull in opposing directions, a view of ‘two worlds’, two solitudes (all the more resonant today) as he struggles to reconcile each with the other.

We’d made the ‘ride’, over similar ground, ten years ago, to be present for the concluding services of this same week, Holy Week, in a building attended by hundreds. This morning I’m reminded of Canon Dennis’ message of that time: how do you appreciate one — without its polar opposite.

This morning, the buildings are empty. The world is a very different place. And we have ‘the opposite’. The challenge, the task it seems is holding the space between, finding ways of ‘joining’, adapting, and continuing to celebrate. A few days ago, we’d watched Bach’s Passion of John, a very ‘different’ vehicle and, for many, bordering on heresy at the time — now a standard. This morning we viewed some of the many, herculean efforts of musicians, clergy, choristers, and parishioners prepared, at personal risk and cost over the past week (again, Holy Week) to provide the elements that transcend ‘bricks and mortar’. Working alone, or in the small numbers that the times allow; singing, speaking to vacant, unpopulated space. Different, to be sure. Lesser, diminished — absolutely not!

It was almost certainly a book. I’d squeezed it, hefted it, held it up to the light. Naught for it, but to unwrap it. Hmm. Authentic Happiness. Marty Seligman, the book’s psychologist author, is something of a household name — well at least in my circumscribed ‘household’. He appeared on the radar many years ago for his research around something called ‘learned helplessness’ — a concept that examined the level of ‘percieved control’ we have over our lives as a contributing factor to our general mental health. In particular, the less ‘felt’ control, the more risk of developing problems, not the least of which was depression.

Like a few such researchers, living on the ‘dark side’ of that psychological coin seemed to lose its appeal for Marty; and he began the shift to positive psychology. (Kristen Neff, another example, had morphed away from self esteem study, at best, the result of comparing self to others less fortunate, to the more uplifting concept of self compassion.) My early 2000’s Christmas gift was an overview of the benefits of focussing on potential over pathology, health over illness. (And, like any good psychological opus, a questionnaire is included to see where the reader lines up.) 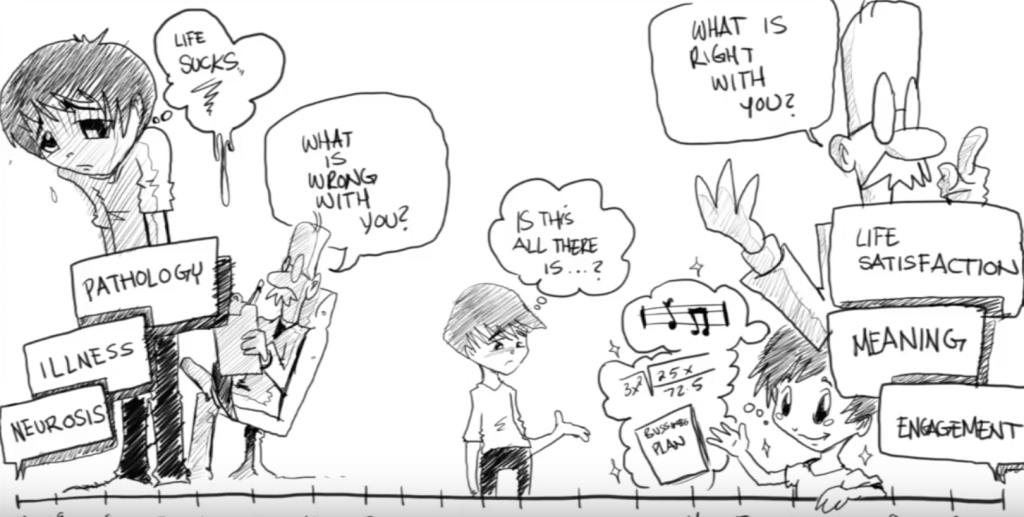 These past few weeks, living in the COVID zone, daily changes and challenges preoccupy our information sources. The need for truthful, accurate reporting, updating is critical to choices we must make. There is absolutely no benefit in deluded, pollyanna rhetoric, trotted out for purely political gain (feel free to read between the lines). Putting a smiley face at the end of a communication ain’t helpin’. Equally however, for the individual, mindset, perspective, attitude are figural parts of our psychological tool kit.

I’ve become increasingly aware of the tenor and tone of posts, emails, telephone conversations that now form a very large part of my communication with ‘outside world’. A choir friend sends out daily ‘alternative interpretations’: ‘stuck at home vs. safe at home’. A longtime physician acquaintance shared this animated post:

And our yoga instructor circulated a telling graphic: 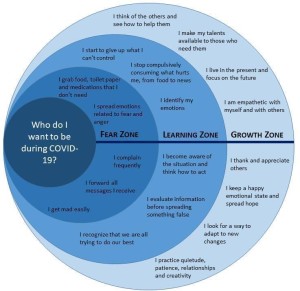 As a card-carrying cynic and extrovert, I’m not an easy sell. But the arguments for borrowing a piece of Marty’s happiness formula are compelling, crucial.

Another brick in this necessary seawall of defence against the current viral tidal wave (and its attendant pounding on our mental health — anxiety, fear, and depression in the forefront) came through a New Yorker piece this week. The article is built around the timing of Sir Isaac Newton’s incredible contributions coinciding with his two years of ‘self isolating’, as the bubonic plague resurfaced in London in the 1660’s and headed toward his then residence in Cambridge:

Newton’s home, a farm called Woolsthorpe, lay about sixty miles north of the university. Suitably distant from the nearest town, it was where, in near total solitude, he would invent calculus, create the science of motion, unravel gravity, and more. The plague created the conditions in which modern science could be created. . .

The author, unfortunately, goes on to argue that attributing his epiphanies to his retreat setting is over-simplifying, unscientific, and refutable — no shit, Sherlock. But you can bet your gravitational pull that it sure didn’t hurt! Personally, the article’s negative spin did little to undermine my growing awareness that embracing our sequestered seclusion is a ‘best’ mindset. Coincidentally a time of productive reflection and thought, isolated from, if not the worries and uncertainties, at least the (frequently self-imposed and artificial) deadlines and intrusions. This is not simply making lemonade (when we’re given lemons) or floating along in a Neverland of false hope and misinformation. This is a time to celebrate the answer to the too often asked question: ‘When will I find the time?’ Newsflash: the time is now!