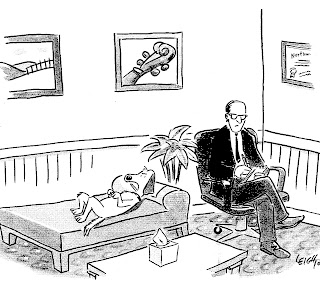 The caption reads: “And then it hit me: I’m salivating to a damned bell!” A victim of his own reflexes: the cage door rattles and, before he knows it, he’s drooling. For those of us a little less than familiar with the Pavlovian ‘conditioned response’, it’s one of the most basic forms of ‘learned behaviour’; and generally, as our wee, four-legged friend points out, one that occurs at a barely conscious level — in gear before we’re even fully aware of it.

It occurred to me that our response to solitude, the prospects of time ‘in isolation’, alone with oneself shares some of these reactive, ‘automatic’ features. Or perhaps more properly and completely, the ends to which we will go to avoid this state of contemplative silence and seclusion . I happened upon a heartfelt ‘confession’ in the form of a letter to the Globe’s editorial page this weekend from a university professor who is a self-admitted email addict. Finding himself unable to resist the ‘bell’ (as our puppy would have it), indicating ‘new mail’ on any of the various devices by which he (supposedly) connects with the outside world, he engaged a self-imposed attempt at email withdrawal — cold turkey. And only with very modest success. He gives account of ‘needing a fix’ a dozen times per hour and ‘feeling the rush’ of a new message, compulsively replying on the spot — lest the sender become discouraged and fail to send more messages.

Very similar was my own experience of sitting with a client this past week, only to have his mobile chime signifying ‘new text’. Watching him search frantically for the device, I’d assumed (silly me) it would be to turn it off before the sender ‘re-sent’ (of maybe that should be resent). Wrong. The search was to read this hot epistle before it’s content cooled. ‘What’s up? Busy?’ Disbelief deepened as my client proceeded to reply: ‘Nope. What’s up with you?’ — then without a hint of self-consciousness (let alone, apology), folded the phone and pocketed it. Only to have the same ritual repeated another four times. That this man should have had such a strong, near-terrified response to being signed off work a few days earlier by physician (‘What will I do by myself??’), should then have come as no surprise to me. Solitude and the opportunity to recover from a plethora of issues facing him finished very distant seconds to the prospects of being ‘cut off’ from his social network. What’s so terrifying?

The New Yorker’s book review this week of Eric Klinenberg’s Going Solo: the Extraordinary Rise and Surprising Appeal of Living Alone, points up that not everyone is quite so untracked by solitude. A state that has historically been vilified, viewed as alternately as pathetic, suspect, and desperate, to be pitied, pathologized, and frankly avoided like the plague until the past twenty years, has finally begun to be valued as a conscious and intentional choice — rather than a default state to be tolerated only when all ‘social’ options have been exhausted. The reviewer is quoted: “far from being a mark of social abandonment, the solo life tends to be a path for moving ahead, for taking control of one’s circumstances. . . providing ‘restorative solitude’, exactly what we need to re-connect.”

I continue to be reminded of a research project conducted at my alma mater, many decades ago, which examined differences in nursery school children and their social choices: those that readily and easily engaged in shared play with their peers and the ‘isolates’ that opted to play alone or in parallel play. An underlying presumption, at the time, was that the former group was somehow healthy and adjusted; the latter displaying some form of aberrant choice, perhaps inhibited by shyness or worse, and in need of corrective therapy. I wonder if our compulsive prof, client, and Pavlovian pooch would feel quite so certain of this hypothesis’ correctness.

And finally, my wife and I were discussing a book she’s been devouring this past week — and one more bit of evidence that the constant connectedness of the ‘global village’ is not the only way to go: Quiet: The Power of Introverts in a World That Can’t Stop Talking (Susan Cain). She, my wife as well as Ms. Cain, is a self-admitted introvert. She maintains it’s some of the glue that keeps our relationship right on track: the less she talks, the more room for me! The telling revelation was her comment that she sees me (and I think quite accurately) as a ‘pseudo-extravert’. Namely, someone who has crafted the social facade (often read as being extroverted) of easy social engagement, readiness to enlist the nearest lamppost in conversation; but who is perhaps more contented in solitary activities. She cites as evidence my aversion to ‘joining’, my abject terror at attending dances (and ‘letting go’), my habit of ‘dipping into’ chats preferably with strangers — but always with a quick exit route in sight, and finally, the valuing of solitary cycling, running, photographing. . . and meditating.

Our mindfulness practices are custom made to explore our comfort with solitude — even when participating in a group. Our comfort with our ‘aloneness’ equips us so much more fully to engage our community. It frees us from our phobic aversions to finding ourselves alone with ourselves. And it just maybe allows us to ‘unplug’ from the abundance of often meaningless exchanges that intrude upon our ‘real lives’ — driven by the fear of no more emails. So what’s up? Ya busy?